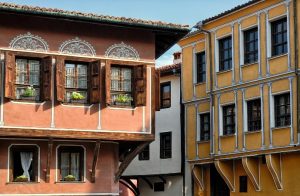 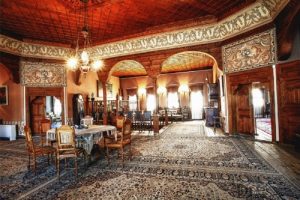 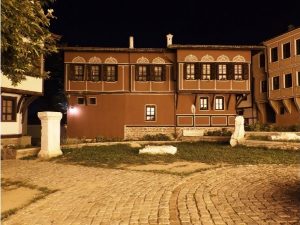 The Balabanov House is one of the landmarks of the Old Plovdiv. Its story began in the late 19th century with the wealthy merchant and member of the tailors’ guild, Hadji Panayot Lampsha. Around the turn of the century the Hadji Lampsha house was sold firstly time to the Nayden Gerov’s nephew Hristo, and then to its last owner, the merchant of wood Luka Balabanov, whose name it bears today.
The building was in decay thus it was demolished in 1935, but was reconstructed in 1979 according to the records of architect Hristo Peev, the most outstanding researcher of the Revival period houses.

The house, impressive in size, is a typical example of the symmetrical houses from the 19th century built following the model along the maritime coast of the Bosphorus. Today it opens two distinct worlds to its visitors – the world of the Bulgarian Revival period with its lavish wood- carved ceilings, the periods furnishing and the beautiful alcoves, named alafrangas. The other world is that of culture and art.
In line with the idea the home reborn of Hadji Panayot Lampsha to serve as a Plovdiv palazzo with authentic interior, the house today hosts temporary expositions, conferences, meetings with writers, chamber concerts, theatre performances and meetings.