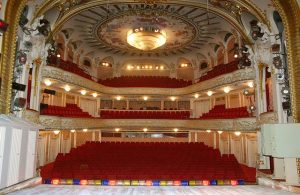 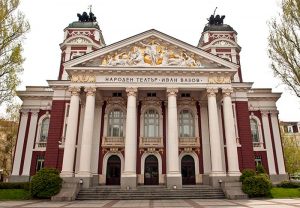 Being one of the pillars the Bulgarian intellectual society, which was reborn in the beginning of the 19th century, the National Theater Ivan Vazov opened its doors for its first big-stage performance on the 3rd of January 1907. The play was very special because it displayed a theatrical adaptation of Ivan Vazov’s “The Outcasts” – a very important piece of literature for the Bulgarian Renaissance. Initially it was called just “The National theater” but from 1962 to this day the theater bears the name of “the father” of Bulgarian literature and drama Ivan Vazov.


The building of the National theatre itself was built in a Baroque style following the project of Viennese architects Hermann Helmer and Ferdinand Felner, who were influenced by mythology for the façade as visitors are greeted by Poseidon/Neptune riding his chariot, which is being pulled by four horses and two separate chariots sitting atop two towering domes on the right and left side of the entrance.

The National theatre Ivan Vazov has seen a lot of faces and destruction for its 120 years as an establishment. Especially during a performance in February 1923, when a great fire broke-out and destroyed the building. The reconstruction began just two years later and finished in 1929, with this rate of rapid reconstruction being proof of the great significance of this building. Since the building of the National theater was grounded by the fire, German architect Martin Dülfer was put in charge of the reconstruction. He decided to build with steel and concrete, making the National theatre the first steel-concrete building in the country. Dülfer wanted only the best. Because of his idealism towards work, he decided to install the best German equipment for theatrical mechanizations constructed by German companies MANN and Krupp. These companies were supplying the most elite theaters in Europe’s major cities. The equipment, that Dülfer decided to include, is still being used, meaning it has been working for 88 years without any major problems.

The bombardment of the 10th of January 1944 by the American Army destroyed the south wing of the National theatre Ivan Vazov but did not manage to damage the façade or other parts of the building. Before the bombardment in 1944 the first balcony was mobile but was fixed permanently after. Another interesting feature that remains to this day is that the chariots sitting atop the tower domes are being kept in place with springs. Yes, springs. Springs, which haven’t been in need of maintenance or other sorts of technical attention.

This is the brief history of the mesmerizing building of the Nation theater Ivan Vazov. One does not simply walk past the entrance, as it is magnetic and breath-taking. It welcomes you to the magic of the theatre, which has a total of 3 stages. The main stage can host 860 guests, who have come to enjoy the live performance of the offspring of genius and hours of practice.

Being located in the City Garden, the National theater Ivan Vazov offers its visitors a walk in the romantic park after the strong emotions felt inside.