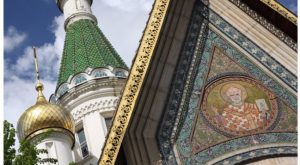 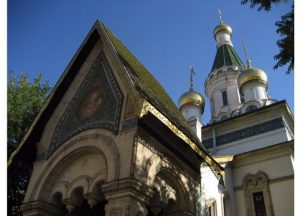 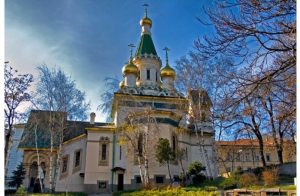 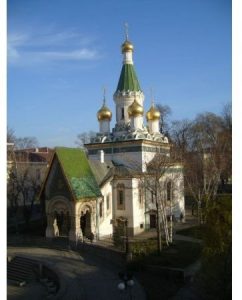 The Church of St Nicholas the Miracle-Maker is a Russian church in the center of Sofia.

The church was built on the site of the Saray Mosque, which was destroyed in 1882, after the liberation of Bulgaria from the Ottoman rule.

It was built as the official church of the Russian Embassy, which was located next door, and of the Russian community in Sofia. The church was designed by the Russian architect Mikhail Preobrazhenski in the Russian Revival Style, with decoration inspired by the Muscovite Russian churches of the 17th century. The church has 5 small domes, coated with gold,  the highest one is 19m. The bells were donated by the Emprore Nikolas II himself.

Construction began in 1907 and the church was consecrated in 1914. The church remained open after the Russian Revolution and during the Communist period in Bulgaria (1944–1989), though priests and church-goers were carefully watched by the State Security police.The exterior was recently restored by the Russian Government.

The church is very popular not only for its architecture, but also because the crypt housing the remains of Saint Archbishop Seraphim, considered as miracle-maker by many. The crypt is located beneath the Church’s main floor. Dozens of people still visit the grave of the archbishop, who died in 1950, praying and leaving notes asking for wishes to be granted.

The Church of St Nicholas the Miracle-Maker