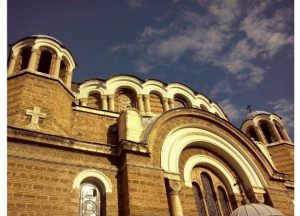 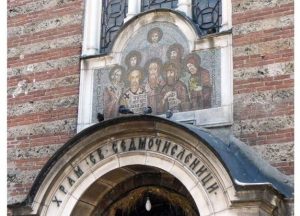 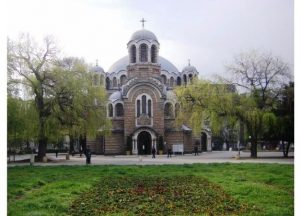 The “SvetiSedmochislenitsi” church is an Orthodox church located in the Bulgarian capital – Sofia. The name “Sveti Sedmochislenitsi”, meaning “The holy Seven”, refers to the Saints Cyril and Methodius and their canonized pupils. In the Orthodox world they are commonly addressed as “Sedmochislenitsi”.

The building started functioning as an Orthodox church on the 27thof  July 1903 when it was inaugurated and given the name “Sveti Sedmochislenitsi”. Before it began to be used as a church the building had various purposes throughout the centuries. Suleiman the Magnificent had the intention of building a mosque that would make the churches in the city pale in comparison. Thus in the year 1528, by order of the Sultan, the “Black Mosque” was built. It was called that because of the color of the minaret – it had been sculpted out of dark granite. The mosque was constructed on the grounds of a nunnery, which belonged to the Rila Monastery, and the nunnery itself being placed on the grounds of a 4th century early Christian temple, the ruins of which were unearthed in 1901 during an excavation.

Aside from the early Christian temple another discovery was made in the foundation of the building now known as “Sveti Sedmochislenitsi” church – a pagan shrine to the God Asclepius from the time of the Roman city Serdica.

The minaret of the “Black Mosque” collapsed after an earthquake in the early 19th century. The mosque was neglected and abandoned by the Ottomans.  After the liberation of Bulgaria the building became used as a military warehouse and prison.

The person who suggested the conversion from a mosque to a church was the Russian architect Alexander Pomerantsev. Bulgarians architects Yordan Milanov and Petko Momchilov were put in charge of the design of “Sveti Sedmochislenitsi” church. They designed the dome, the narthex and the bell tower in a traditional Bulgarian style but also under the influence of Romanticism. Only the main hall and partially the dome were preserved from the old mosque.

The rough construction ended in 1903 but the inner decorations were not finished until 1996. The icons were painted by young artists with one of the first donors being Tsar Ferdinand.
The large candlesticks standing in front of the altar were cast in 1903 from obsolete eastern rumelian police badges in honor of the Unification of Bulgaria which took place in the year 1885.