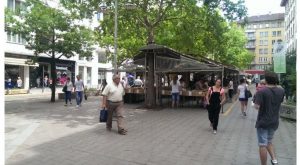 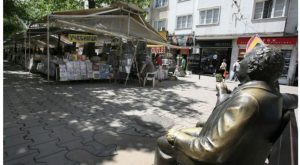 Slaveykov Square is one of the most popular squares in Sofia. It is named after Bulgarian writers Petko and Pencho Slaveykov, who are father and son. One of the landmarks of the square is the sculpture of Petko and Pencho, sitting next to each other on a bench, as if they are having a discussion.

Slaveykov Square is famous for its many book stalls, as books from world classics to student texts books are sold there every day.

A square called KafeneBaşi (KafeneBashi) is first mentioned to have existed where Slaveykov Square resides now in 1515. A coffeehouse, a mosque and two Turkish police stations were situated there. In the 17th century, the square was an important crossroad, stretching from modern Sveta Nedelya Square to Vitosha Boulevard. After the liberation of Bulgaria, the square was extended, and many one- and two-story houses with gardens were erected on the site, one of them belonging to Petko Slaveykov, whose name the square later took. During the 1920s and 1930s, Slaveykov Square formed its modern appearance, with five-to seven-story buildings with shops on the ground floor. The first significant constructions appeared in this period — the Teachers’ Fund (1924), the Ministry of Public Works (1928), and the French Institute (1934), which to this day stand there. After 1944, the traffic around the square was gradually limited, and it turned into a pedestrian zone. In the years following 1990, the square became a preferred place for booksellers, and many bookshops emerged on it. Supposedly because of the City Library in Sofia, that is located at the end of the square next to Rakovsky Street.