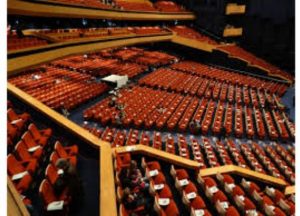 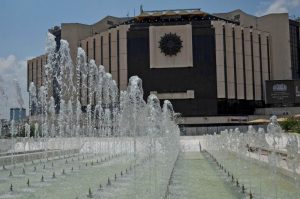 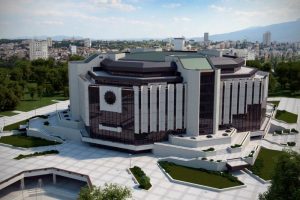 The National Palace of Culture (Bulgarian: Национален дворец на културата, Natsionalen dvorets na kulturata; abbreviated as НДК or NDK), located in the center of Sofia, is the largest, multifunctional conference and exhibition center in south-eastern Europe. It was opened in 1981 in celebration of Bulgaria’s 1300th anniversary.

The National Palace of Culture was initiated as a suggestion of Lyudmila Zhivkova, the daughter of the communist leader of the former People’s Republic of Bulgaria – Todor Zhivkov. It was designed by a team of Bulgarian and foreign architects led by the now deceased Alexander Barov. Internally, the building’s style is made up mainly of a contrast between an octagonal motif and heavy, dark colors and large bright murals depicting historical figures and events cover the main wall of many of the smaller halls. Viewed from above the National Palace of Culture is said to represent a phoenix.

In the ‘90s, immediately after the change in the country’s the political system, the National Palace of Culture lost a significant portion of its property. Since 2011, it has been restructured into a commercial company, but it remains a state property.

In July 2005, the National Palace of Culture was named best congress center of the year by the International Organization of Congress Centers. The conference centers are suited to host a great variety of events, including concerts, multilingual conferences, exhibitions, and shows. It has an area of 123,000 square meters on eight floors and three underground levels. The National Palace of Culture has 13 halls and 15,000 square meters of exhibition area, a trade center and a car park. The main hall can seat over 3,000 people.

Annually, the National Palace of Culture is host to over 300 events such as international conventions, political forums, business conferences, scientific symposiums, music and film festivals, concerts, dance performances, theatre, exhibitions and fairs. The National Palace of Culture is a major concert venue. Many world-famous singers, musicians and dancers have chosen to perform in its halls over the years. Among them being: José Carreras, Mark Knopfler, Jon Lord, Gary Moore, Steve Vai, Anastacia, Sting, Joe Cocker, Andrea Bocelli, Uriah Heep, Al Bano and many others.

Dance and show performances have included: Michael Flatley’s Lord of the Dance, the Fire of Anatolia, Night of the Sultans, Shaman, David Copperfield, Cirque Éloize and others.