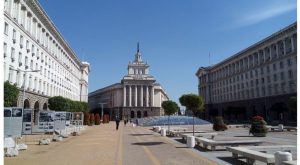 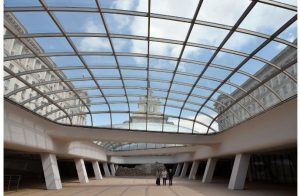 The Largo is an architectural ensemble of three buildings designed and built in the 1950s with the intention of becoming the city’s representative center. Regarded as a prime example of Socialist Classicism architecture in Southeastern Europe.

The Largo houses the Bulgarian National assembly (previously used as quarters for the Bulgarian communist party), the TZUM department store, the Council of Ministers, the Presidency, the Sofia Hotel Balkan and the Ministry of Education

The yellow pavement, around which the Largo is centered, is called Nezavisimost (Independence) square. It has two lanes with a lawn in the middle, where the flags of all NATO member states stand erected.

Following the political changes after 1989, the communist symbolism in the decoration of the Largo were removed. The most symbolic act being the removing of the red star, which was situated atop the former Party house, and replacing it with the Bulgarian flag.

In the 90s came the idea to reshape the former Party house by exposing the ruins of ancient Serdica, which lay directly beneath it. This was proposed because the people did not want communist memorabilia to be the accent in the city’s center. We can see this today as the two underpass in close proximity reveal the remains of the ancient city.