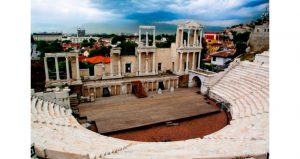 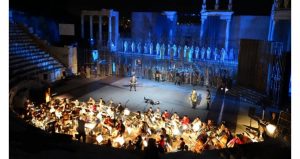 The Ancient  theater  in Plovdiv is one of the world’s best-preserved Roman  theatres. It was constructed in the 90s of I century AD, probably under the rulership of Emperor Trajan. The theatre can host between 5000 and 7000 spectators and it is currently in use.

The ruins of the theater were found in the early 1970s due to a landslide. This caused a major archeological excavation. The restoration of the Roman theatre in Plovdiv is considered one of the best achievements of the Bulgarian Conservation School.

The theatre itself is divided into the seating section (auditorium) and the stage (orchestra).The spectator seats are orientated to the south, towards the ancient city in the lowland and the Rhodope Mountains. The stage building has three floors and is a high wall behind the stage floor, supported by columns. The facade is cut through by three symmetrically located gates. The entrances to the orchestra, which are uncovered and vaulted, connect the seats’ section  with the stage building. An underground vaulted passage begins from the centre of the orchestra, goes under the stage building and leads out of the theatre.

Similar to all the theatres on the territory of the Roman Empire, in the theatre of Trimontium the honorary spectator seats were inscribed. There were inscriptions not only for the representatives of the city council but also for magistrates, friends of the Emperor, etc. Some honorary inscriptions show that the building was used as the seat of the Thracian provincial assembly. Built with around 7,000 seats, each section of seating had the names of the city quarters engraved on the benches so the citizens knew where they were expected to sit.

Nowadays the Ancient Theater plays a significant role in the cultural life of the city and serves as a stage for many international festivals, plays and concerts , especially during the summer months.